Ah, it’s that time of year when I get to get all about me in public (oh wait, it’s a blog about me and my artistic endeavours, I do that every time I post, whoops).

So, how do I feel I did this year? Well, it started out on target:

The greenhouse we finally put up last autumn lasted a whole week before a storm ripped the sides off. We reinforced it with batons, I spent a happy week building lots of bespoke furniture for it, and it managed to house my first successful tomato crop before the storms ripped the roof off instead. So we went back in with the batons and reinforced the roof, too.

Status: so far so good. Unfortunately, all it needs is a really good storm and the whole thing is away again, no matter what we do to it.

This was kinda urgent since the old job was a contract. My boss got it extended, which was very sweet, but all good things come to an end. As luck would have it, I got a new job that began the very next day. Miles and miles further away, slightly fewer hours, slightly lower pay, but any port in a storm, what? Status: sorted.

Would you Adam and Eve it, almost as soon as I started the new job they needed someone to fill in at the old one again. So I took on both.

Sadly, this had a bit of an impact on the old free time, as did:

As the only bridesmaid/ maid of honour for me mate’s wedding, it fell to me to do the honours for the hen-night. And with only three weeks’ notice, what! There was no time to get money out of everyone up front (hassling people you don’t know for cash is always the best way to make friends before you see them all at the wedding, right?) so I told them it would be free and hosted it at mine. (See under: ker-ching, above). I mean, we had room to sleep twelve. Just about. If I got more beds. And gave the place a thorough sprucing-up; by which I mean, not only moving everything out the way and giving the place a hose-down and several coats of paint, but also building some walls that had been left unfinished when we first got the place. Yes, myself and the G Monster had quite merrily* lived in that squalor for over a year while doing up the main house, but asking other people to do so? Unthinkable!

*For a given definition of ‘merrily’, obviously.

In my panic, I went a bit balls to the wall with the nautical theme (the wedding was at a lighthouse) – sent them on a cruise, hired a naked butler, put up an ‘under the sea’ theme for the lounge, bought pirate-themed cocktails, made the guests fish about in a paddling pool filled with coffee and cocoa powder with their toes for coins (I ran out of time to make them walk the plank, which was going to be done blindfold in the hopes that they would believe they would fall into water rather than just being on the lawn).

Status: There were inflatable parrots everywhere in the morning, including in the toaster, so I think it was a success?

I did this in a couple of days out of only what was lying around, and very pleased with myself I was too. Unfortunately for me, next door promptly built a lean-to too, only hers is professionally-made by a team of workers, and is a gigantic thing made of all the shiniest materials. You have an excellent view of it from my lean-to, which you could easily fit twenty of into her one. In fact, our house would fit into it. She is lovely, so I am not jealous at all. Am not.

Status: Okay, I totally AM.

I got through this without participating in any arguments, letting the bride down or making a Scene, which is my best-case outcome for social interactions. Also, the lassie who did my make-up made me look like Katie Perry. Although according to the photos I actually looked like a giant blue pineapple, but you can’t have everything. The bride looked wonderful, the cake was an octopus attacking a lighthouse, the first dance was in a bouncy castle, the photos were amazing.

Status: It was awesome.

It’s a bit windy here, almost all the time. A lot of the time it’s very windy. I had tried planting all the fruit bushes along the front very close together, but they still hated being the first thing the gales hit after the wind-farms you can see on the horizon. I’ve been feeling a hedge might help – despite the fact that we have a big hedge, and a big fence, along the side, and sure, you’re still blown off your feet on especially windy nights – but I had to talk the G Monster into it. However, with all my spare cash from working two jobs, I now had money to burn. I just had to build some mighty raised beds for the fruit bushes to move into, dig out 45 bushes and move them, dig a 33m trench and prep it, shift all the strawberries that had escaped into the lawn while I was working two jobs, make some planters, put up a trellis, and get it all done before 130 baby trees arrived in November. 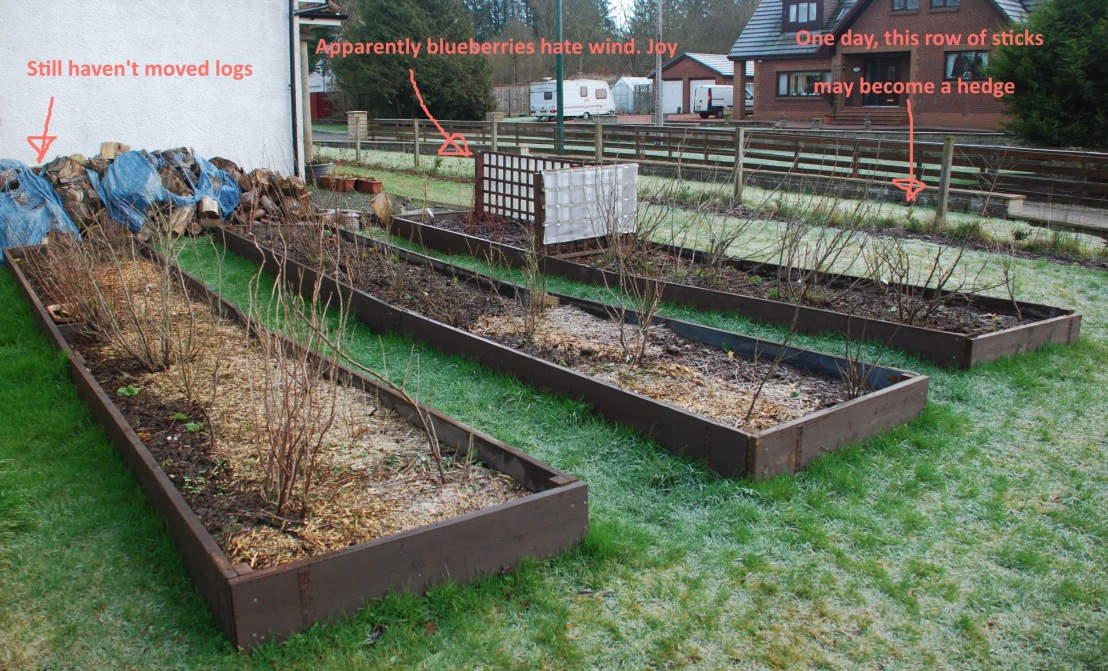 November came and went with no baby trees. Or confirmation email, now I came to think of it. So I repeated the order. 260 baby trees turned up, nearly giving me heart failure.

Status: if this works, it will be the densest hedge in all Christendom. 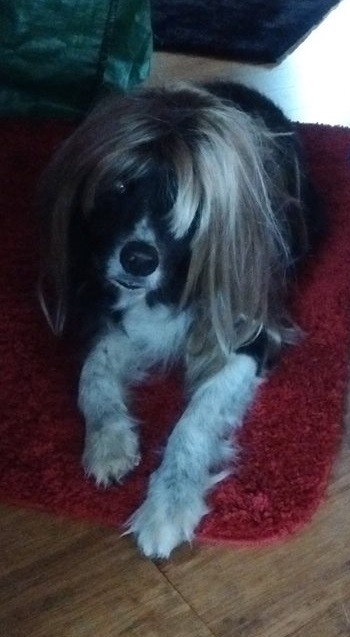 I’ve spent years saying I want to get organised and disciplined enough to get up early before work every day and take some exercise. Last Christmas the universe sent us a dog, so now I damn well have to, let that be a lesson for everyone reading this. He turned 15 in November, and the G Monster’s sister came to celebrate with him. We have fallen in love with him soooo hard. This year we took him to Wales, where he got ill, and Stonehenge, where he walked 10 miles in one day (and got ill), and Arran, and the Lake District, so whatever he was up to for the first 14 years of his life, he’s been about a bit now. I don’t know if it’s possible for dogs to be on the spectrum, but he does have a number of… odd… habits:

Obviously your dog (or cat, or tortoise or whatever) is objectively the best one in the whole world, but Dogface is the best one for us.

Status: yay, Dogface. Never leave us. Oh wait, one day you totally will.

9. The Twelve Days of Cthulhu-mas

I am laying the blame for this on the G Monster’s sister. When she came up for Dogface’s birthday she said she would commission a portrait of one of her own dogs but “didn’t want to do it right before Christmas because you’ll get stressed trying to do that plus Christmas”. This was very sweet and thoughtful on a number of levels, but sadly I got a fever right after and, knowing I was free of the stress of trying to do a Commission Plus Christmas, I spent the next three weeks doing something far more stressful instead. Go me. I should be proofing it for stray pixels right now, in fact, because having got this far I might as well go the whole hog and attempt to put it out as a novelty book.

Status: who the hell do I think I am, eh.

I’ve spent years saying I want to get organised and disciplined enough to do some volunteering, because I am conscious that I have a very idyllic, me-centred life and ‘should give something back’, and also, see under 8) above, I am incapable of learning from my mistakes. I was more specific about this notion, however – it has to be volunteering that doesn’t involve a) going anywhere or b) meeting people or c) interacting with people. Lest you think it’s laziness, it’s not; it’s simple cowardice.

Comeuppance arrived the week before Christmas when the G Monster’s mate needed someone ‘reliable and conscientious’ to help out with some charity work at short notice; all those people were busy, so she got me. Boom boom.

Status: I have spent the festive period on one hell of a learning curve.

Yes, yes it was. I just wanted to get my feet clear first. Never do this. It’s like in Red Dwarf (the book, not the series) where Kryten, the droid who is programmed to clean up after humanity, is on his way to escaping from Better Than Life. Only he sees a pile of dishes that need washed, so he decides he’ll just get that done before he goes. Three months later the pile is no smaller and he realises he’s been conned. If you never do anything creative until you’ve got your feet clear, this will be you. It’s certainly me.

Anyway. Here we are in 2019, which I am starting with a bugger of a head-cold. The dishes are done, the world outside is so frozen I just had to use a pick-axe to break up the mound of left-over earth that the G Monster has been giving me meaningful hints about getting out of the way, Dogface has been taken for a three-mile walk over the moors and is curled up asleep by my feet, and all is well with the world. Quick! Time to get creative!

This is a text widget. The Text Widget allows you to add text or HTML to your sidebar. You can use a text widget to display text, links, images, HTML, or a combination of these. Edit them in the Widget section of the Customizer.
Loading Comments...
%d bloggers like this: